We are professional agents who believe that a good Real Estate is not losers. We provide all kind of services in our business (Real Estate). We stand with clients till end.


Operating Since: 2012
Dealing in: Sale/Purchase and Rent/Lease of Independent Houses, Apartments / Flats

Promenade road area locality is where you can enjoy chirpy mornings as sunbeams dance in your early hours of day specially in morning a winding road in a bustling town lined with old majestic trees in the heart of happening city that's the perhaps how the describtion would read to your new address on the promenade road one of the few roads laft in bangalore that still sketches some remnants of a beautiful past home to coles park many well known schools and colleges and hospitals and markets and a railway station and shopping areas promenade road is known as frazer town as well and has a historical past even as a modernity is fast making its presence falt the town still houses colonial bungalows of gothic-styles and british architecture perched in the center of such beauty and conveniences this review gives an excellent review of locality in the bangalore frazer town is a suburb of bangalore cantonment in bangalore north-east-south spread over to apporximetly 4.2 kms it was established in the year 1906 and is name after stuart mitford frazer who was the tutor for and guardian of krishna raja wadiyar 4 the royal maharaja of mysore this locality was established to decongest the existing old bangalore at that time by britishers and foundation stone was laid by mrs f j richards with a commemorative plaque on the corner of coles road this ares has many churches, schools, mosques, temples and hospitals as well as a lot of shopping and eatery places surrounding this location are like ares namely cox town richards town cooke town cantonment area ulsoor lake area lingarajapuram commercial streate etc Frazer Town, now officially known as Pulakeshinagar, but still known by its former name is located in the north-east direction of Bangalore city in the state of Karnataka. Rich with green lands, the locality is an essentially known residential and commercial hub for its close proximity to institutes, medical care centers and hospitals, as well as industrial hub in a short distance drive. Frazer Town is well connected with roads like Promenade Road, Coles Road, Mosque Road, Madhavraya Mudalia Road (MM Road), Pottery Road and part of Wheeler Road. The Coles Road is a paradise for food lovers and also houses the NDTV office. MM Road is an active commercial road with number of restaurants, air ticket booking office, hospitals, retail grocery shop, etc on its way. Davis Road is just a short drive away from Frazer Town, which is a prime residential area in Bangalore. The HAL Bangalore International Airport is at a short drive and the nearest railway station from here is the Bangalore East station. Frazer Town was developed during the British era, and still holds the patterns of conservancy lanes which are now converted into car parking area for the sake of preservation. A friendly neighborhood with lush green and facilities at short distance, this area is an ideal spot for residencies.

Bangalore :Provident Wel worth city situated on Doddaballapur road, tucked in the northern corridor, has benefited from the recent infrastructure face lift given to the roads leading to Bangalore international Airport (BIA), the planned peripheral ring road (PRR), the proposed information technology investment region (ITIR) and the aerospace park coming up near devanahalli are also expected to work in favour of residents and residential areas in and around yelahanka, jalahalli and doddaballapur road, unlike the outer ring road (ORR) that's choc-a-bloc with residential development, doddaballapur road still has a good amount of breathing space, large open land parcels, so many realtors are coming up with villas on the stretch like prestige estates, century real estate and legacy groups are among them,potential for capital appreciation for villas in doddaballapur road is higher than on sarjapura road as price the later area have already appreciated on account of the development there, people are exploring the option of a second home and this stretch considering the affordability factor, beside villas are preferred b'coz people want to travel out of city to stay in piece of mind with security, you can flat at sub- rs 3000 per sq ft in the areaso you get bigger flat low investment considering that you get anything for less is a good option

Prestige Four seasons & Reo grande and many more are own by the Prestige builder known as Prestige Groups, famous for there quality & quantity constructions with latest technology used in building structures one among is four seasons and Reo grande apartments on brunton road, these apartments consist of many good and famous peoples living there including the clan of prestige group, this apartment are built in keeping mind for the luxury and large quantity use like it starts from 2000+ sq-ft to 5000 sq-ft each flat area with all good furnished floor, these apartments are very near to CBD district like shopping mall, road connectivity, specially trinity Metro station, Hosmat hospital and ITC hotels & many more on MG road stretch. Also it covers large area in greenery environment nearby,easy access to cubbon park etc

Jakkur Plantation has many botanical gardens, bamboo plantations etc which offers wonderful view of the natural surrounding. With more than 200 years of history shaping the life of an entire community and eco-system, Jakkur Lake has been dubbed as a ‘birds’ paradise’. In fact, it can be called the North Star of Bangalore.The announcement of the Akravathy Layout changed the lives of an entire community with sites being formed at the edge of the lake. Farmers protested at the poor compensation and took the government to court. many other prominent builders have made this heaven by developing new projects

Whitefield is oldest part of Bangalore, earlier Whitefield used to be only nearest paradise for Bangaloreans
and old age people or our beloved senior citizens as it used to cover worst area of green tree and farms before MNCs and concrete building structures came know. 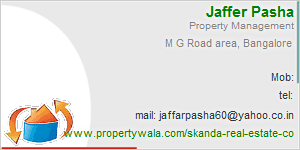